Back in “the day,” whenever that was, you had two choices for a belay device. You either punched a bight of rope through the small hole of a Figure-8 device, or put it through a hole milled into a flat plate of aluminum called a Sticht plate. Both devices worked fundamentally the same way by crimping the rope and locking it off when it was weighted. Today, while the basic devices are about the same, coming in various shapes, weights and complexities, there is also newer assisted braking technology that is a game changer.

The Black Diamond Air Traffic Controller, or “ATC,” was the first of a genre of devices that were lighter and more compact than the old Sticht plate. Basically a formed tube of aluminum with rope slots and a cable loop to keep you from dropping the thing, the ATC was so simple and worked so well that its name, like that of Xerox, soon became synonymous for this style of device. Now nearly every company has a tubular belay device of some design. 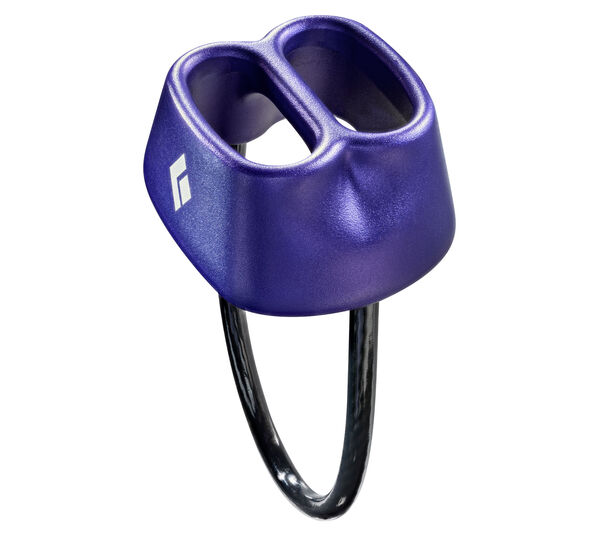 The Black Diamond ATC—a tubular style belay device—is classic and still a great piece of gear. Most other climbing companies that manufacture belay devices have a similar product.

The ATC-style device works well because the rope feeds straight in and straight out, so it twists the rope only minimally and feeds smoothly, although function depends to a large degree on the rope diameter, stiffness and coating. A large surface area keeps the device relatively cool, although it can get scorching hot during multiple long rappels. In any use, it effectively clamps on the rope, giving you good control whether rappelling or belaying. ATC style devices are also super light, usually around three ounces, and compact, about the size of an apricot. Of all devices, the ATC is the most popular and common. Configurations abound, some have a V-notch to cinch better on smaller ropes, while others have cooling fins. For sheer versatility, whether you are alpine or ice climbing, heading up El Cap, sport or trad climbing or even TR-ing in the gym, ATC devices are impossible to beat. 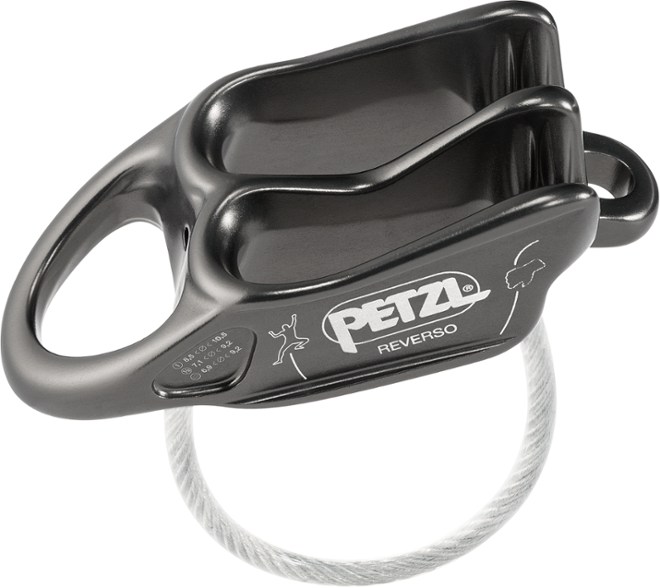 The Petzl Reverso is a tubular-style belay device that can be used in “guide mode” to belay a second from above.

A slightly fancier version of the tubular belay device has an extra loop of metal on the back, which allows it to function in “guide mode.” This enables you to belay a second from above with a greater degree of security. The orientation of the device in guide mode creates an auto-block effect when the follower falls.

If you use an ATC-style device, watch for wear. These devices tend to wear thin and become sharp where the rope brakes over them on the outside edges. A worn ATC can in turn badly wear your rope. Replace it as necessary—they are inexpensive, after all. 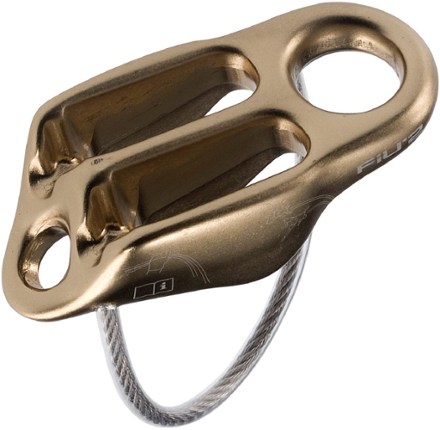 The CAMP – Cassin Piu 2 is another example of a guide-mode tubular belay device.

No device will belay automatically, but units such as the Petzl Grigri, which use a mechanical camming action to clamp the rope, come closer than any, so, right or wrong, they got stuck with that tag years ago. Nowadays, these types of belay device are called Assisted Braking Devices, or ABDs. 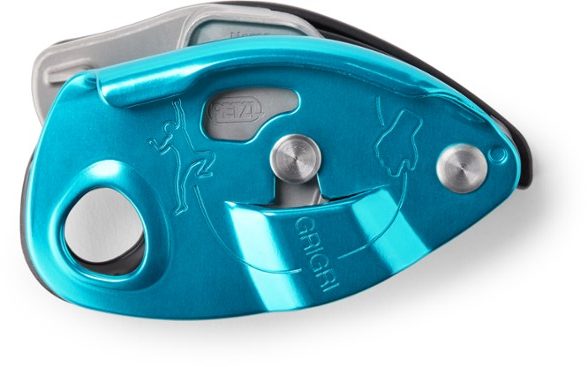 The Petzl Grigri is the original active assisted braking device. Check out the Petzl Grigri+ a bit futher down—the latest iteration of the device. 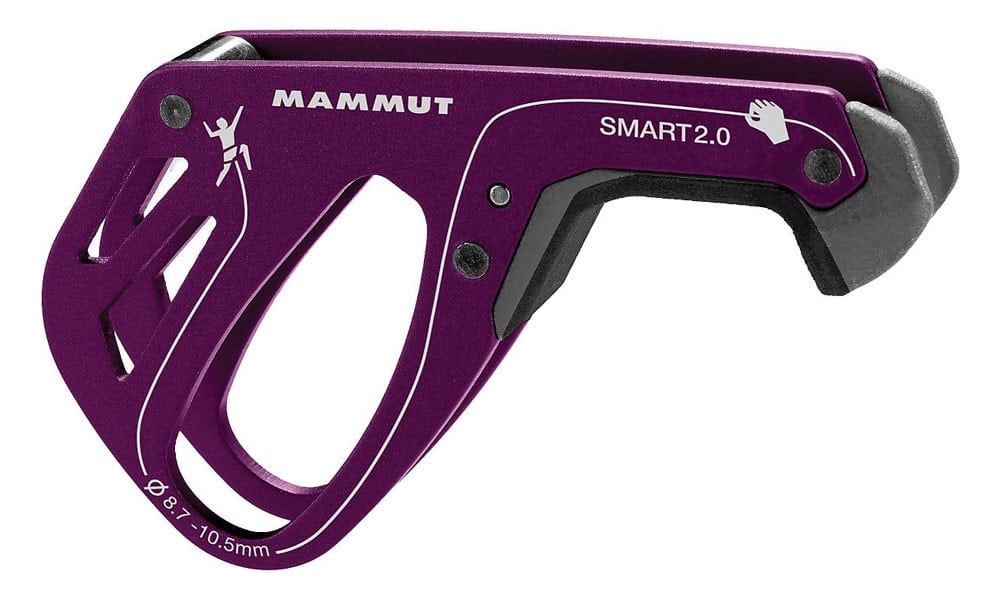 The Mammut Smart 2.0 is an example of a passive assisted braking device.

First, active assisted braking devices: these are expensive, heavy and bulky compared to their passive counterparts or ATC designs. They also only work with single ropes, usually have a limited rope-diameter range, and grip poorly on frozen or icy ropes. But still, we love them: they provide the greatest degree of security of any type of belay device. ABDs like the Grigri spare the belayer’s hands from fatigue and wear and, when properly used, add an additional layer of safety. When they clamp down you only need to keep a light (but still firm!) grip on the rope. Holding a fallen leader is a cinch, and these devices are arguably the most popular device for sport climbing. (Note: ABDs, like any belay devices, are also subject to user error in that they can be loaded dangerously wrong.) 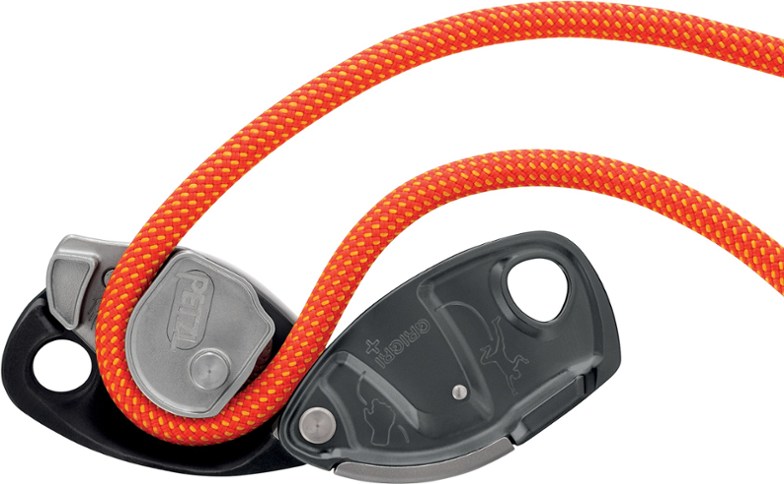 The Grigri+ is Petzl’s newest iteration of the classic assisted braking belay device.

Passive assisted braking devices rely on the same principles that the active ones do, but achieve their results by relying on the angles created by the device in different positions, some of which cause the rope to pinch down. While cheaper than their active counterparts, they are still more expensive than tubular style devices.

All of the assisted braking belay devices behave slightly differently. Some are smoother (much smoother) than others, and some are downright tricky to operate. With practice, they all work fine, but can take some getting used to.

Below are several of the most popular and newest ABDs on the market, both passive and active. 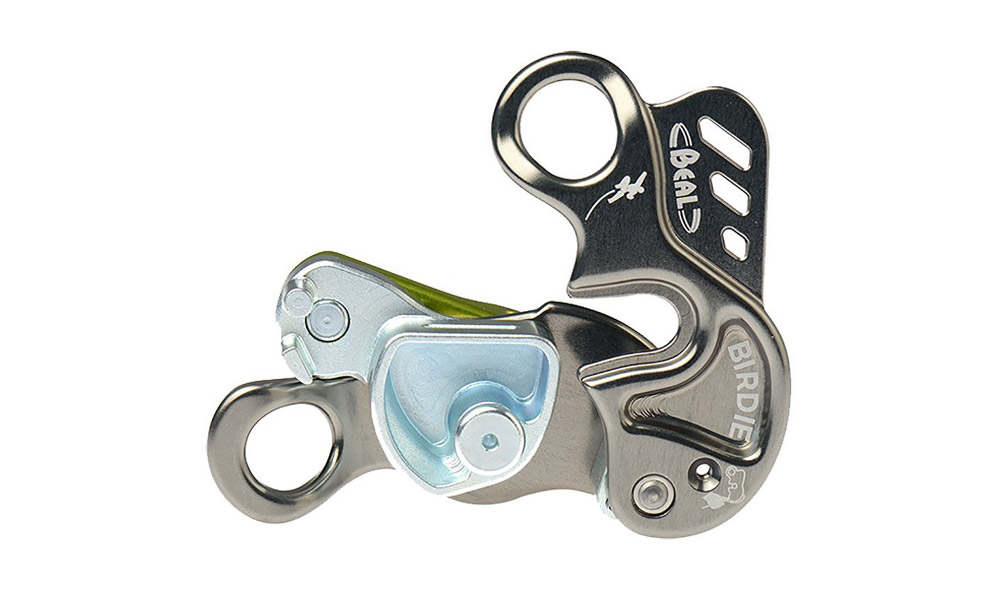 The Beal Birdie is a new active assisted braking device that operates similarly to a Grigri. It comes in at $75—cheaper than many active ABDs. 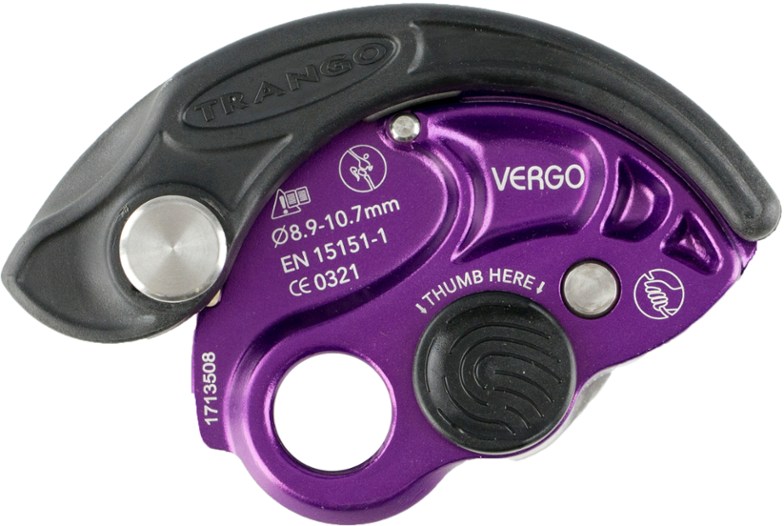 The Trango Vergo is an assisted braking device that functions similarly to the Grigri and the Birdie. 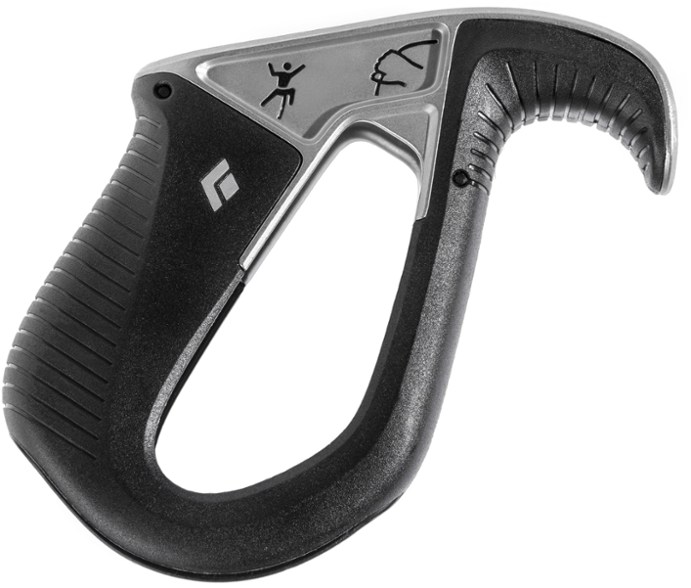 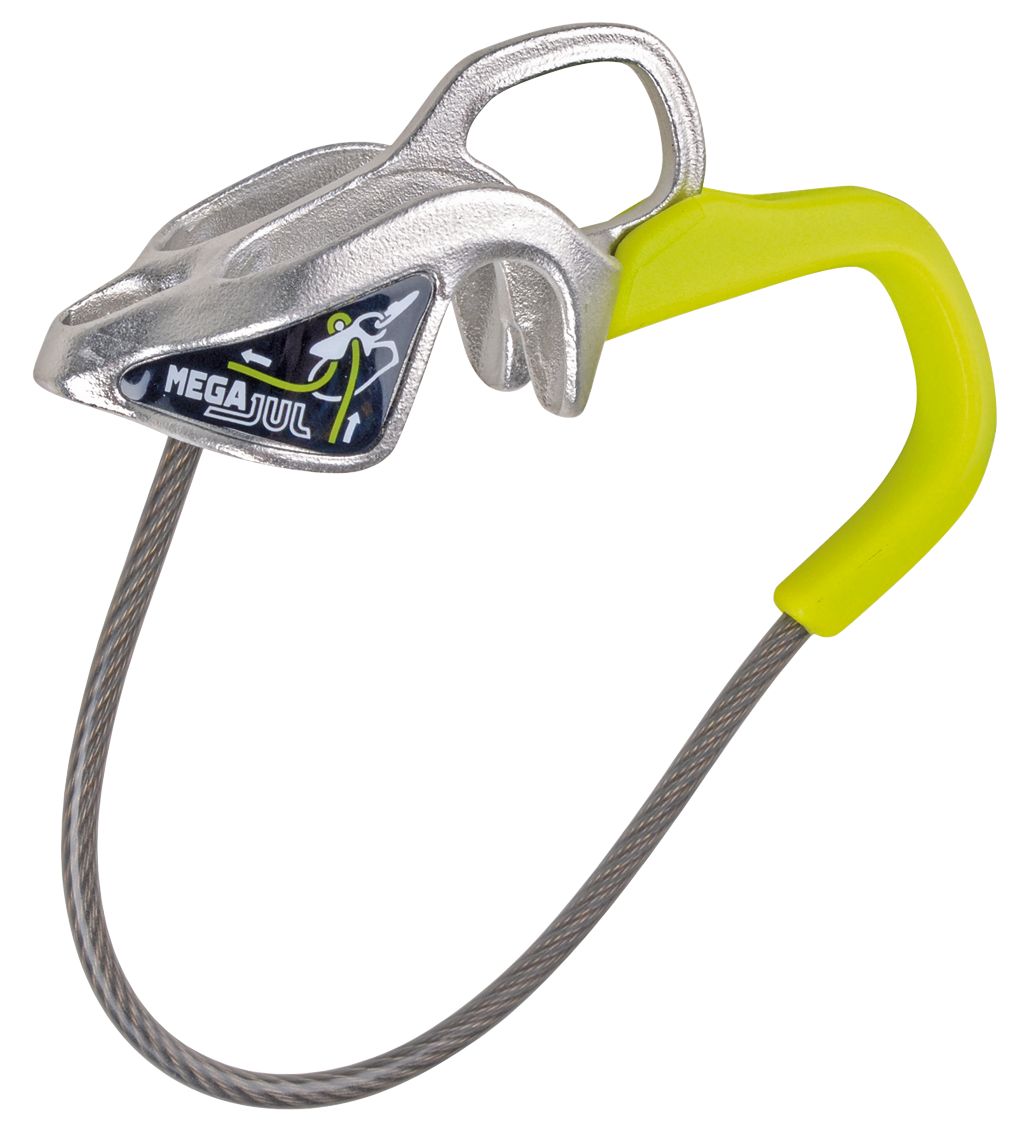 The Edelrid Mega Jul is a passive assisted braking belay device and easily one of the lightest belay devices—of any type—on the market. 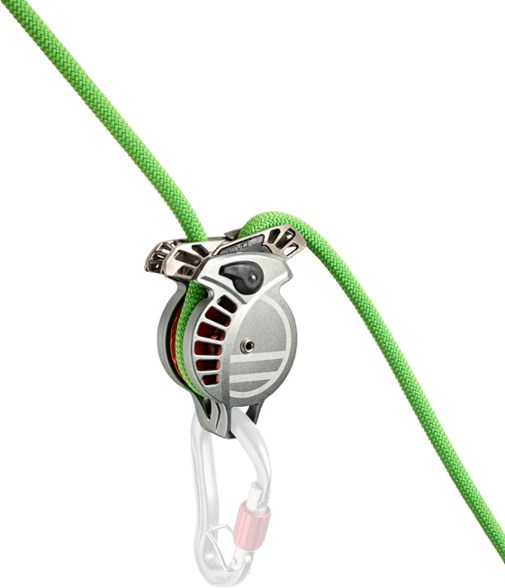 The Wild Country Revo is one of the more innovative belay devices in recent years. The auto-blocking function engages when the inner wheel passes a certain speed. 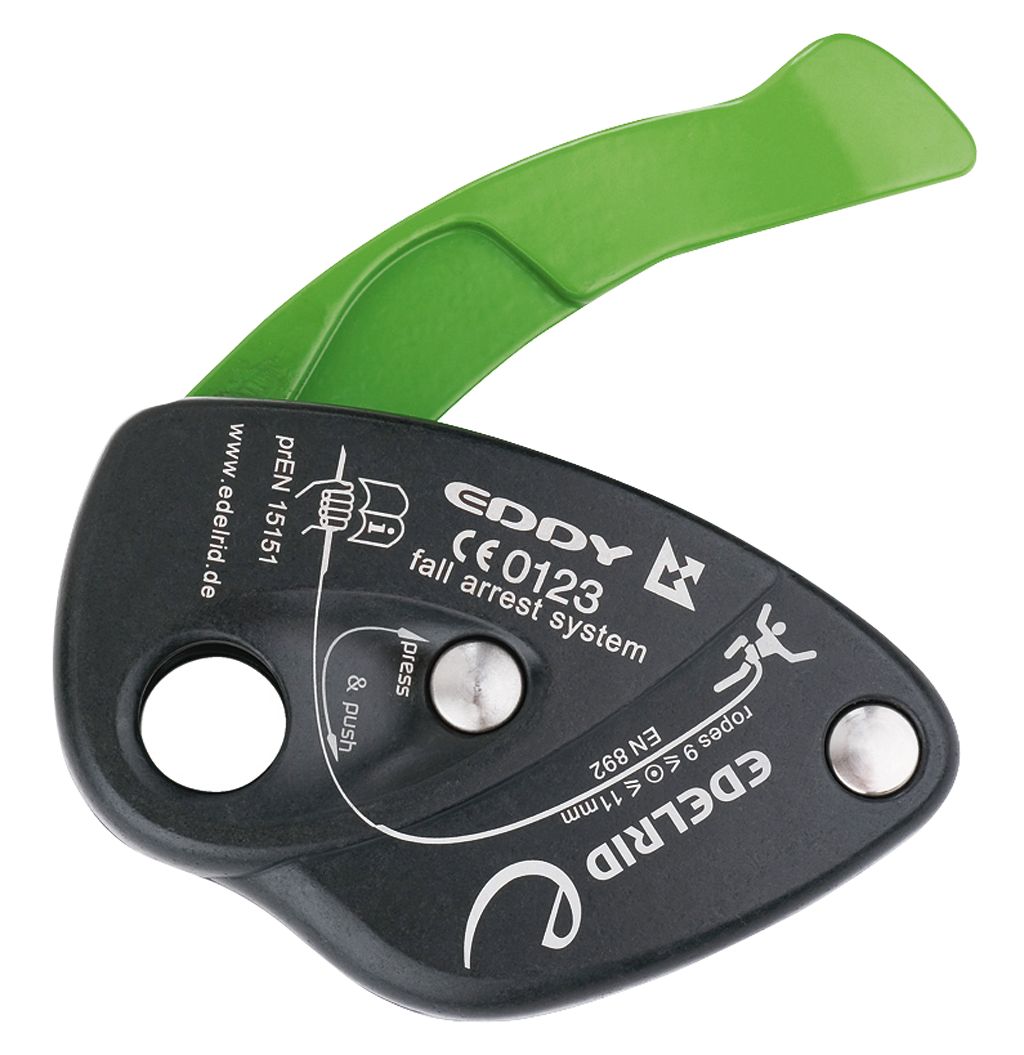 The Edelrid Eddy is an an active assisted braking belay device that is a bit heavier but adds even more safeguards in for lowering.

A flat piece of aluminum with rope holes cut into it, the plate functions like the ATC, but is the least-common device these days—few models are still being made. Some plates have a spring to keep the device away from the belay carabiner, preventing it from locking when you feed rope in or out, while still letting it lock in the event of a fall. The spring can tangle on slings, though, while a plate without a spring is apt to lock up when you don’t want it to. Still, they work fine once you develop a knack for their operation. 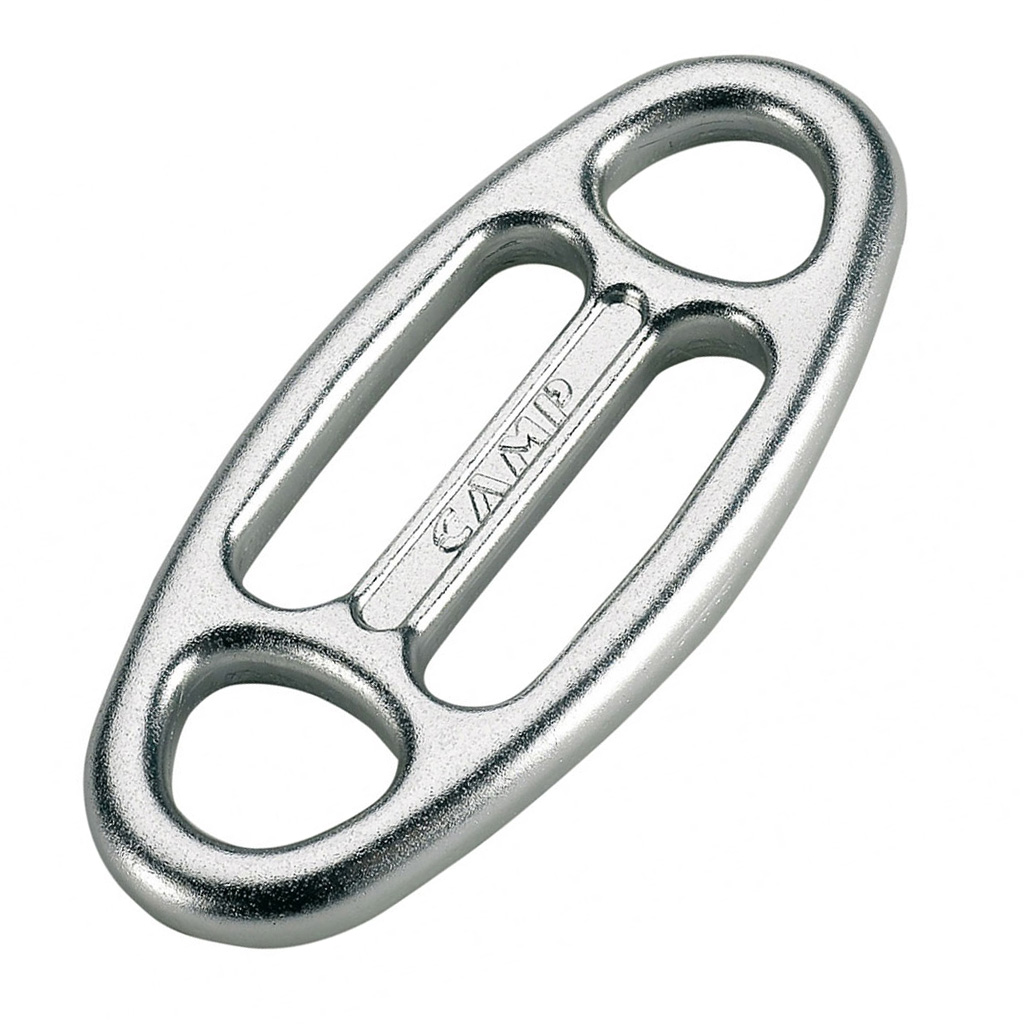 The CAMP Ovo is a basic, no frills, durable plate-style belay device.

The “8” is ubiquitous for sport rappelling, but hardly used in the climbing world. Used for rappelling, a figure-8 twists your ropes so badly it’s hard to recommend it. Nevertheless, the 8 does offer excellent rope control on rappel ropes of varying diameter. For belaying, you push the rope through the small hole and use it plate style, and in that mode it works well, although, unless you keep an eye on it, it tends to drift down the rope, especially when you are belaying a second up. Similar to tube-style devices, most companies offer a basic Figure-8-style device. 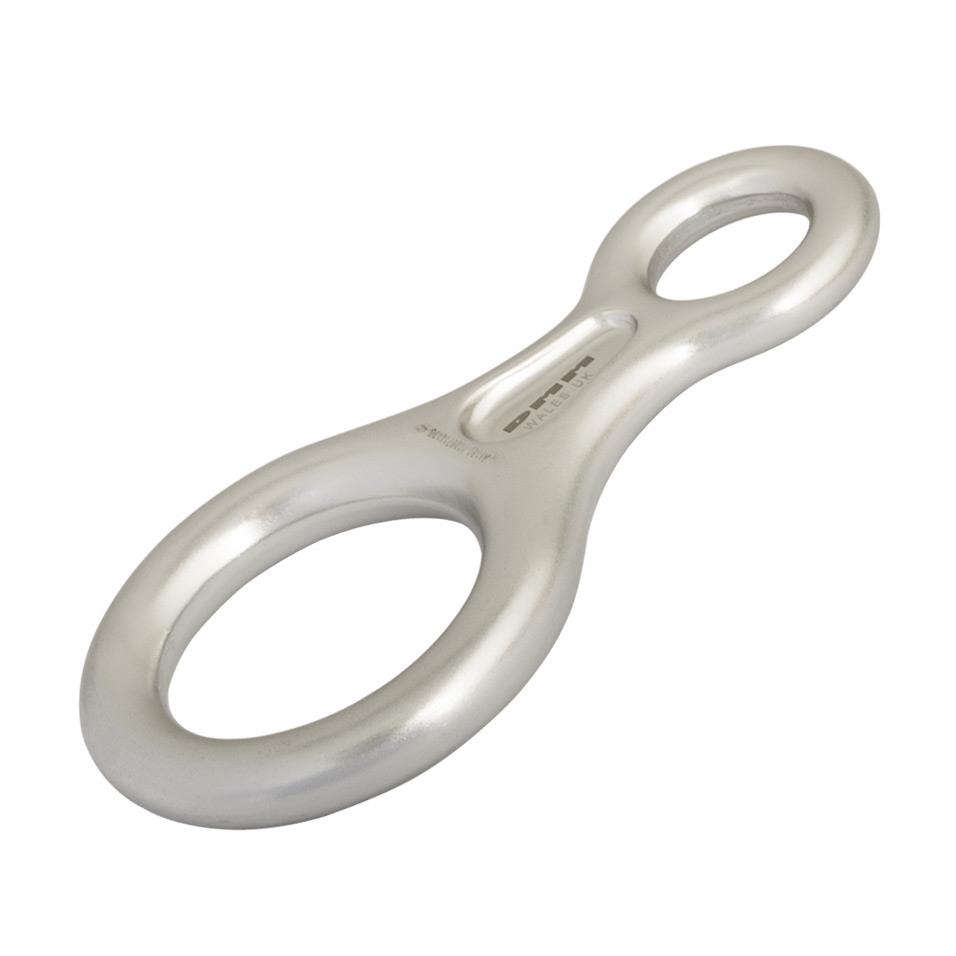 Other Factors to Consider

Pay attention to this! Not all devices work with all diameters of rope. Mismatch the rope to the device and it will feed poorly to not at all, or, worse, provide inadequate friction in the event of a fall. Manufacturers note which ropes their devices are suitable for, but take this with a grain of salt. Coatings, density, sheath weave and even the diameter itself (one manufacturer’s 8.8mm might be another’s 9mm) all determine how well or poorly a given rope will work with a given device. In short, heed the listings, but double check with your rope, and check again every time you switch ropes. Auto devices are especially fussy when it comes to rope diameters. 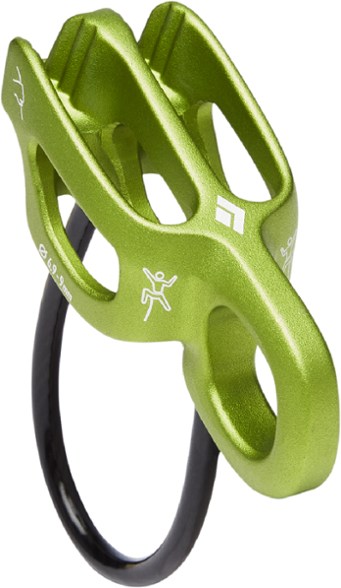 Black Diamond makes a guide-mode ATC—known as the ATC Guide, as well as a lighter version called the ATC-Alpine Guide, shown here, meant for alpine climbing and smaller-diameter ropes.

Most, if not all, belay devices lock the rope off statically in a fall. Some people argue that auto devices are a bit more static than plates, ATCs or figure-8s. Indeed. Under very high loads, a plate or ATC device may let a bit of rope slip through. Not a big deal, really. If you are concerned about giving a dynamic catch, don’t worry about the device. Instead, use technique to soften the fall. When you belay and your leader falls, jump up slightly when his weight comes onto the rope. Adding this bit of dynamic action to the catch will make a noticeable difference. In the case of most hard falls you’ll be dragged or lifted, inadvertently giving a dynamic catch regardless of your belay device.

Double or Single Rope Use

Any device will work at a crag on a sunny day, but in harsh alpine, ice or mountain environments you’ll want one that will feed and bite down on a frozen rope. You’ll also want the versatility of a device that you can belay and rappel with one, and one that is compact and light. It’s a tall order, but numerous devices, notably those of ATC design, fit the bill.